A springtime loop - 4 in the Sangres

14ers.com held its annual spring gathering this weekend.  Much to my relief, the location that "we the people" voted for the gathering was the Horn Creek trailhead in the Sangre de Cristo range.  I did find some irony in the fact that the trailhead didn't give immediate access to any fourteeners.  But I definitely wasn't complaining.  I had to miss the gathering last year, as it fell on the same weekend as Collegiate Peaks.  This time around, though, the timing was perfect and I had myself with enough free time to go spend a day in the mountains.
I pulled into the trailhead on Friday night with some ideas of what I would like to do, but no firm plan.  I had studied up on some of the possible climbs in the area, but wanted to see what everyone else was doing before settling on anything.  By the time I slipped into my sleeping bag under an almost too obnoxiously bright supermoon, I had decided to check out the "Horn Loop" - Little Horn Peak(13,141'), Fluted Peak(13,554'), and Horn Peak(13,450').  I also held in the back of my mind the possibility of attempting the centennial Mt. Adams(13,931') in addition to the loop.  That part of the plan was contingent on conditions allowing for a safe ridge traverse without snow equipment, which I wouldn't be able to judge until I was there.  Bottom line - I just wanted to have a fun day in the mountains. 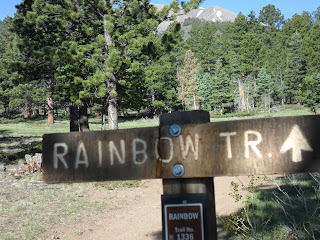 One of my favorite aspects of spring climbing is the stable afternoon weather.  It afforded me the luxury of sleeping in - I didn't even hit the trail until 8:15 on Saturday morning.  I geared up fast and light, hoping to run as much of the approach as I could before an inevitable blanket of melting snow buried the trail.  A couple quick turns on and off the Rainbow Trail found me on my approach - the Horn Creek trail.  (which, I should point out, doesn't lead to Horn Peak.  Horn Creek drains Little Horn Peak.  Dry Creek drains Horn Peak.  Unfortunately there is no Dry Peak to further this confusion)

A little over 2 miles in at 10,400', I ran into one of the guys who had turned around.  He had a defeated look in his eyes as informed me of the postholing nightmare just ahead of me.  Ugh, that kind of stuff usually doesn't attack until the afternoon!  Of course, I did what any normal person would do - I turned sharply right, straight up the south face of Little Horn's long east ridge.  This afforded me the "opportunity" to gain 1,600' vertical in a little less than .6 of a mile.  Joy.  It did get me to better footing quickly, though, and once on the ridge I made quick work of the terrain. 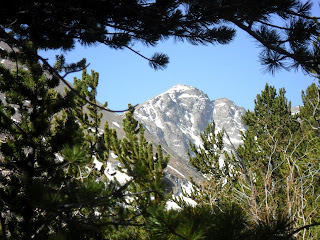 I ran into (the) Bill Middlebrook near the summit of Little Horn.  He snapped a shot for me and let me know a few of my friends were just headed down the other side of LH on their way to Fluted.
On the descent of Little Horn, I started eyeing up the ridge to Mt. Adams.  It seemed to be clear enough of snow to at least take a look at it.  I was making great time, so just as I caught Otina and her crew, I veered left and got ready for the most exciting part of my day.


The going on the Fluted/Adams ridge was slow to say the least.  More than once, I found myself making a challenging move or two.  Nothing too crazy, just enough to keep it fun.  I was surprised by the amount of exposure offered by the ridge, too.  All in all, I put this up there near the El Diente/Mt. Wilson ridge in terms of difficulty.  A little more exposed, but not nearly as rotten. 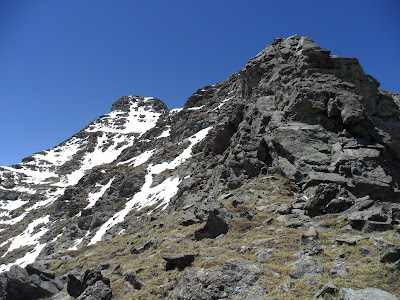 I had read a few TRs of Adams before heading out for the weekend, and I remembered distinctly the "Class 5 Chimney" mentioned in one of them.  Sure enough, there it was.  Sure enough, it was a thrilling finish to a beautiful summit.  Getting to the top of Adams via the Fluted ridge gave me reason to do a fist pump.  Awesome!

Besides the chimney, most of the difficult scrambling was found low, near the Fluted/Adams saddle.  Going up, I knocked out one mile of the ridge in 80 minutes.  Coming back down, it "only" took 60 to cover the same mile.  I still had a long ways to go; however, once I reached the saddle the tough stuff was behind me. Before I knew it, I was looking at the surprising summit of Fluted Peak.

My water level was getting alarmingly low by now, but otherwise I was just soaking in every moment as I meandered down and around to begin the climb of Horn Peak.  The rock on the lower part of the ridge was "scralus" - that sharp, crappy stuff that moves AND rolls on you.  Yuck.  The higher I got on the ridge, though, the higher quality of talus I came across.
I hit the summit of Horn at 4:15 PM, 8 hours after I started.  8 hours is a full day's work.  I know where I'd rather be.

One concern I had was the condition of the Dry Creek drainage.  If it was anything like Horn Creek, it was sure to be chock full of snow still.  I attempted to stay ridge proper for as long as possible, but shortly after treeline I found even the top of the ridge to hold a surprising amount of snow.  I ducked down into the valley after a while, hoping the elevation loss would lead to shallow snow, but alas, I had to pay my dues for having such a fantastic day to that point.  The next mile-plus was postholehell.  The snow was so wet and warm, it acted like concrete at times.  Too often, I found myself thigh, hip, even belly-deep in the stuff.  Of course by now I had run out of water, as well.  The power of a good day was too much, though, and I was able to view this stretch as a mere hiccup to a great day. 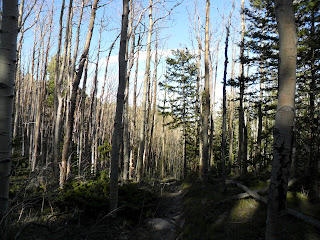 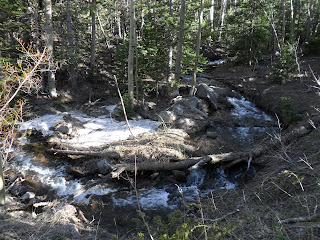 The last two miles of trail opened up enough for me to get my running legs going again.  After 10 hours, the thought of food, water, and a few other cold beverages kept me fueled and focused.  I pulled into the trailhead at 6:15 and promptly got busy at doing absolutely nothing.  Good times. 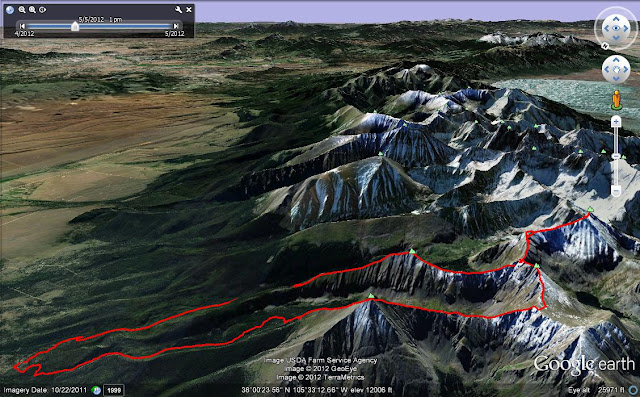 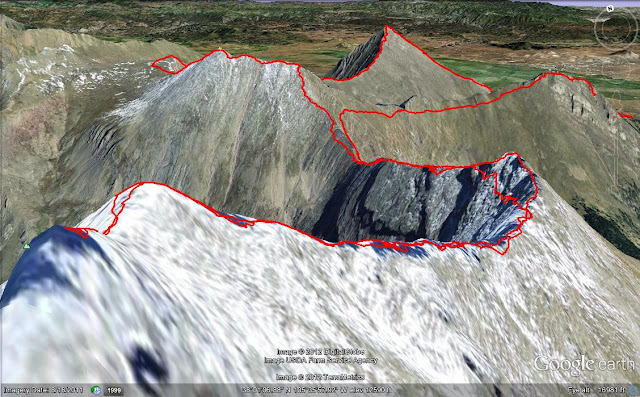